A New Generation In Spinal Cord Stimulation – Available At APMSS

Failed Back Surgery Syndrome (FBSS), or post-laminectomy syndrome, is a condition where patients have persistent pain after spine surgery. This does not necessarily mean that the surgery was a failure.

On the other hand, pain may be due to scar tissue around the nerve roots, inflammation, tissue manipulation, etc.  In addition, the persistent pain does not need to be worse than the original pain, and in most cases, it is actually lessened after surgery.

It is estimated that the occurrence of FBSS is about 20-40% of surgeries, and only about 20-30% of lumbar spine reoperations are successful.

Initial treatments to treat the pain may include physical therapy, radiofrequency ablation of sensory nerves, epidural injections, and even opioid pain medications. However, if there is persistent pain after surgery, neuromodulation becomes an option. 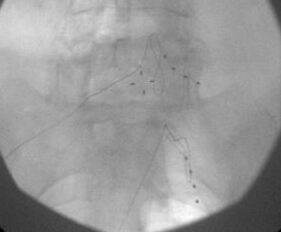 Spinal cord stimulation (SCS) involves placing neuroelectrode wires (leads) behind the spinal cord in the empty space of the spinal canal through needles. These leads carry a mild electrical current to the nerve fibers of the spinal cord, which modify and mask the pain signal from reaching the brain.

A randomized, controlled study has demonstrated that SCS can be more effective than a reoperation. The PROCESS trial showed that significant pain relief was achieved in 39% of patients vs. 12% in the reoperation group, and there was an 87% decrease in pain medications.

In fact, at 6 months follow up, most of the reoperation group (67%) opted for SCS therapy. In addition, systematic reviews have also revealed improvement in quality of life and increased abilities to perform social and work activities.

Older generations of SCS therapy involved the use of paresthesias (sensation of pins and needles) continuously in order to achieve pain relief. In addition, batteries were previously bulkier, with short longevity of battery life.

Currently, new technology has allowed the variation of the electrical frequency to give short bursts of energy periodically, known as burst wave therapy. This therapy not only allow for longer battery life (up to 10 years), but patients no longer need to feel any pins and needles to have relief.

An example of success with this spinal cord stimulation is Nathaniel. Having just turned 40, Nathaniel is now able to resume activities he hasn’t been able to do since 2014. As a passenger in a violent auto accident, Nathaniel underwent spinal fusion and other surgeries to repair his thoracic/lumbar spine, as well as knee.

“The fusion was in the middle of my back. The pain afterwards was so excruciating, I could barely breathe,” explains Nathaniel. “It was a nightmare.”

Determined to avoid further surgery, Nathaniel sought out pain management, experiencing only minimal results. He eventually opted for spinal cord stimulation. Although it provided pain relief, it literally “shocked” him. After the third time, he had it removed.

“I felt like there was no hope,” shares Nathaniel. “I’d had a dozen surgeries since 2015 and the pain in my lower back and down my legs was so bad it would have me in tears.” The pain was more intense at night, which also interfered significantly with his quality of sleep.

Although familiar with the procedure, Nathaniel was highly impressed with the entire team of caregivers, especially that of Park Center for Procedures. This fully accredited surgical procedure center is located on the first floor of the APMSS facility. “The doctors and staff are spot on,” he states. “By far, this is the best team of professionals I’ve encountered in all I’ve dealt with.”

The procedure, Dr. Samcam explains, is minimally-invasive with an incision that is less than an inch. Recovery is quick, as Nathaniel found. “In just three days, I was walking around in no pain.” After two weeks, Nathaniel mowed his lawn – quite the feat after so many years of debilitating pain.

As Dr. Samcam adds, “Pain management has advanced significantly over the years. When in the right hands for proper diagnosis and appropriate treatment, modern approaches to manage pain can resolve or minimize pain without dependency on pain medications.

To discuss chronic pain that has “failed” treatment elsewhere, or to seek options other than surgery, call Advanced Pain Management & Spine Specialists at 239-437-8000. In-office and TeleMed appointments are available.